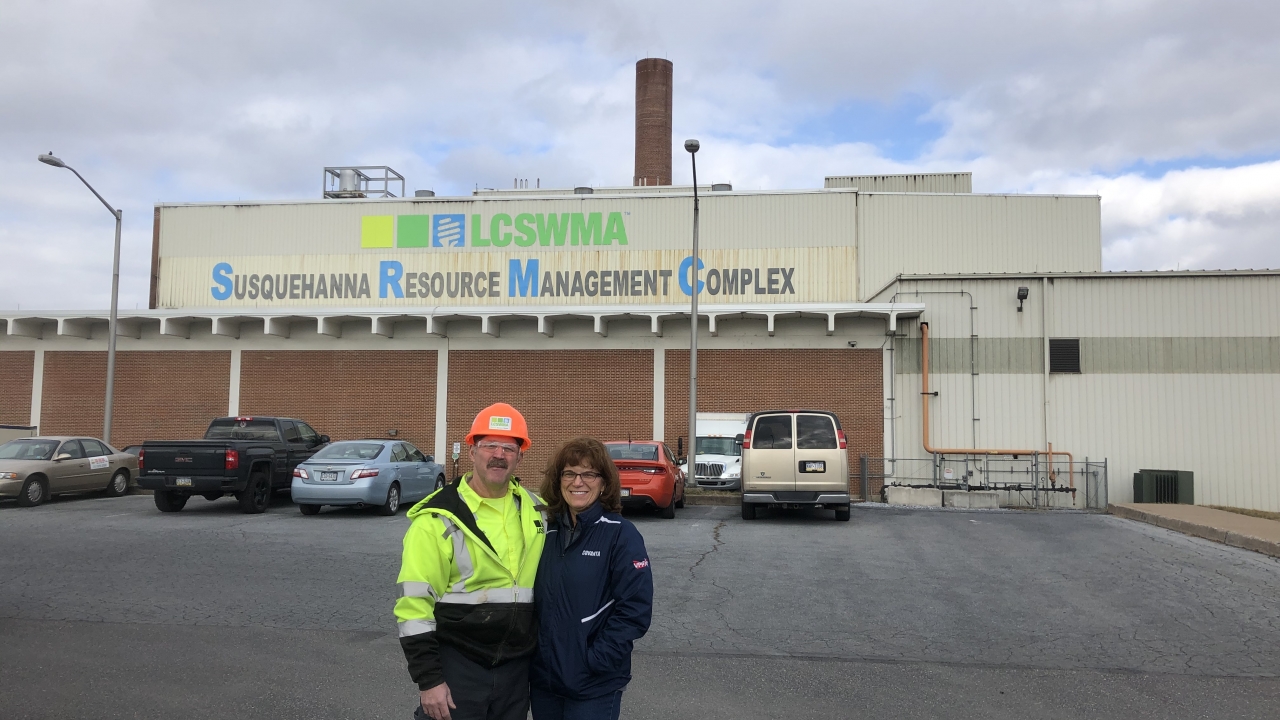 Cinderella’s Prince Charming rode up on a white horse.

Wanda Bauman’s Prince Charming rolled up in a wheel loader.

Wanda, Storekeeper for Covanta Harrisburg, thought the last place she’d find love was at work. But on a fall day in 2012, she caught the eye of LCSWMA Heavy Equipment Operator, Verlan Bauman, who was at the Harrisburg Facility assisting with operations on the tipping floor, on loan from LCSWMA’s Frey Farm Landfill where he usually worked.

At that time, LCSWMA was in the process of purchasing the Harrisburg Waste-to-Energy (WTE) Facility, now called the Susquehanna Resource Management Complex (SRMC), and had staff working onsite. Covanta operates LCSWMA’s WTE Facilities in Bainbridge and Harrisburg.

“I was helping out in the Scalehouse, giving breaks to our weighmaster when I first saw Verlan,” Wanda said. “He would drive past in the loader, and I noticed that he was always smiling.”

The pair would talk regularly but it was three months until Verlan called Wanda to go on an official date.

“I picked up the phone, heard his voice, and nearly fell over,” said Wanda laughing. “I said, ‘it’s about time you called!’”

After that initial date, the pair begin seriously dating and did so for six years. In October of 2018, Verlan and Wanda got engaged.

They were married on May 11, 2019, surrounded by family and friends. Wanda’s grandchildren and Verlan’s nephews served as the couple’s bridal party.

Two years ago, Verlan transferred to the SRMC, so now both he and Wanda work at the Harrisburg facility. Despite working at the same place, they rarely see each other during the day.

Except, says Wanda, every so often she’ll see Verlan drive past her office window in the loader. He flashes the lights to say hello, and she waves back, smiling.

Sometimes the most beautiful love stories occur in the most unlikely of places.

For more information on LCSWMA and Covanta’s partnership, click here.